Welcome, welcome, welcome! I’m Marc Hershon, your host for THIS episode 221 of Succotash Shut-In: The Soundcast Stimulus Package, entitled, “Guestin’ it Up with Pat Kelly & Peter Oldring”. More on our special guests in a moment.

Hopefully you caught our previous installment, Epi220, “Harvestin’ Early Fall Comedy Clips”, with my alternating co-host Tyson Saner. He featured clips from The Whaley Family Hour, You're Dead To Me, and 2 Bears 1 Cave with Tom Segura & Bert Kreischer. If you missed it, it’s not too late to catch it over on Apple Podcasts, Spotify, Stitcher, Google Podcasts, the Laughable app, and our very own homesite: SuccotashShow.com. 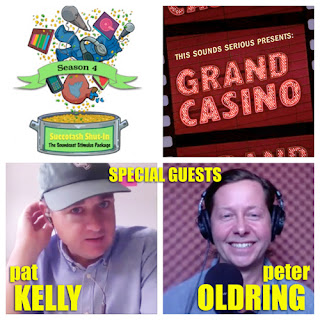 Now last time I was hosting, episode before last, #219, I played a clip from This Sounds Serious. It’s a true crime soundcast spoof of the first order, now in it’s third season. And I mentioned that I might be able to get the brains behind that bundle of comedy magnificence on this show. They have done been got, friend, and I am pleased to tell you that I have Pat Kelly and Peter Oldring as my special guests for this installment. I’m very excited. We’ll get into a lot of the stuff these guys have been doing and making funny since they were in high school. One of the shows they’ve done that makes me laugh hard is Dexter Guff is Smarter Than You…And You Can, Too. It’s a great send-up of motivational business dorks and Peter Oldring really nailed Dexter out of the gate. So I feature one of Dexter's patented "Thought Releases" before we get into the interview.

The interview runs about 45 minutes and we dig into some of the great techniques they've mastered when it comes to nailing certain tropes, cadences, and deliveries with their on-the-money spoofs. One of the first bits that caught my attention was Pat in this video from their This Is That program they've been doing for years in Vancouver: